We woke up at 8:30 today with the intention of getting an early start at Marble Mountain, which is supposed to be one of the nicest places to see and thus, is also one of the most crowded. We ate breakfast, I tried the banana pancake, it was very good. We booked our flights to the island of Phu Quac, which we will be visiting in a few days. We also attempted to book our train tickets from Hoi An to Ho Chi Minh, this is where our timetable fell apart. The flights were booked just fine over breakfast, they were something like $80 round trip. But when we inquired about the train, it was basically sold out. This is when I abandon the type-a rehab I had been attending since landing in Vietnam. I couldn’t help but thinking that this is why planning is key and just floating unprepared from city to city doesn’t work out. We looked at maybe doing a soft sleeper, which was roughly $25 more, but nicer, and when that didn’t work we tried to change to a different train. Both our homestay host and I suggested we fly, as it’s only 1 hour and $20 more than the soft sleeper train, but Mary insisted that $20 is her full days budget and so she couldn’t fly. Eventually after switching trains we were able to get a bottom bunk, hard sleeper. It got us in at like 4am but it was seemingly our only option.

Planning meltdown avoided, we took the 30-minute drive to Marble Mountain on our motorbikes. We were worried because we hadn’t gotten the train situation sorted out until 10:30 so we didn’t arrive at the mountain until 11, and though it might be too packed to enjoy. A woman on a bike approached Mary and told her we could park at her shop as long as we “looked inside” after. A tourist trap obviously, but we did it anyway. We explored the Marble Mountain, which thankfully was not nearly as crowded as we had anticipated, even at noon. It was full of temples, caves, shrines and lots of stairs! If you are going to visit Marble Mountain, which I would certainly recommend doing if you ever find yourself in Hoi An, be sure you dress as if you were hiking in the Amazon Rainforest. We sweat A LOT, but at least once we got to the top of the “fingers” there was a nice breeze. My Egyptian Encounters t-shirt had quickly gone from bright white to tan and dingy, as I seemed to wear it on all of the hottest, most active days. Walking back down the mountain the sweat would shake off my face as I took the steep steps down, being careful not to fall. It was like a tiny rainstorm for all the butterflies fluttering around us. The caves were cool to see, some of them cooler than others, there were people rock climbing outside and vendors selling marble trinkets. We spent over 2 hours there before heading back down to meet our motorbike hostage holder. We went inside and I filmed a little, trying to not look too interested in anything, as Mary negotiated over the price of a marble turtle that was supposedly handmade. 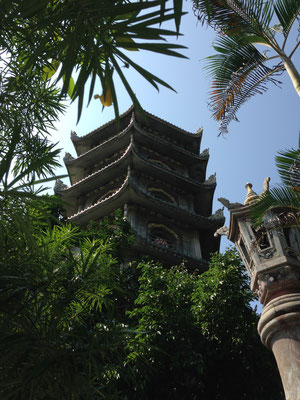 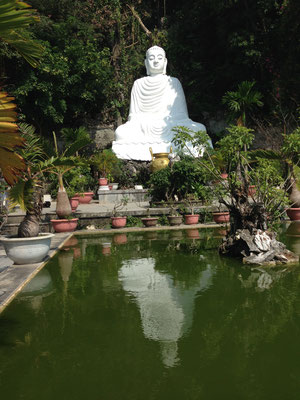 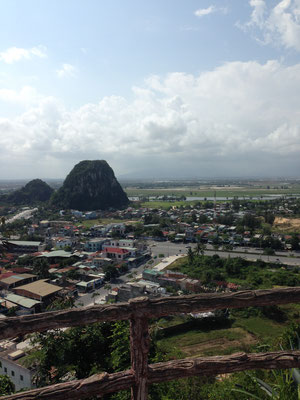 Finally we got back on the road towards Hoi An. I was feeling a little more comfortable with the driving and thought that I could lead. I went in front of Mary and tried to stay with the flow of traffic, at one point I swerved around a semi truck that was clearly going to hold up traffic on the narrow roads. I than waited for Mary to catch up. I wasn’t sure if she hadn’t followed my lead and gotten stuck in traffic behind the truck, or if she had followed my questionable move and died on the side of the road. Fortunately, after a few minutes she came riding up, not missing any limbs. I got us back to the motorbike rental place around 2:15, they were due back by 3 so we were just in time. The woman was very nice and looked pleased that both her motorbikes, as well as the crazy, American, tourists had survived.

We went next door to a coffee shop to research lunch places so we wouldn’t be disappointed again. We ended up at a place I found on trip advisor called “Nocturnal Artist.” After finishing Mary’s iced coffee and my salted lemon juice we walked there. We were surprised to find that we were the only ones inside; every place in Hoi An is more of a dinner place. I’m not sure this restaurant was even really open, but they sat us and fed us anyway. Our waitress was really nice and accommodating, joking with us about other attractive, western, tourists that “Want a Vietnamese girlfriend.” I got a banana, mango, yogurt drink and vegetable fried rice that were both really good! Mary got another local specialty, which the waitress arranged beautifully with shrimp so that we could take a picture of it. By this time it was like 4pm and a late lunch left us with not much else to do.

We wandered around the streets a little more and I paid $6 for a knock off North Face backpack to replace the one I had lost. A Colorado girl can never have too many backpacks. My replacement backpack was nicer than it’s predecessor, though I won't discount the folding feature, which was nice and will be sorely missed, R.I.P. folding backpack. We then walked to Mary’s tailor to see if the shirts were done. They told us they still needed to finish the piping around the edges and they could deliver them to our homestay at 7am the next morning. They also asked about other design aspects, which gave me the impression they haven’t even started making them yet, nor were they in the shop to look at. Mary began to doubt her choice of shop but we tried to stay positive.

We killed time walking around and got a coconut doughnut to share by the river. I was imagining it would be a doughnut with coconut cream filling or something along those lines. It ended up being more of a sealed hamburger bun filled with just chunks of sweetened, shredded coconut, which was still good but somewhat comical. Mary ordered a beer to secure our seats at a table near the water and we watched all the lanterns turn on as the sun went down. We watched a local boy trying to fish, I became overly invested in his success, saying I wouldn’t move until he caught something, but I eventually broke my promise after almost an hour. We then headed to dinner, though neither of us were particularly hungry. I had discovered another place on Trip Advisor called Orivy. It was a little off the beaten path, down a dirt alley that didn’t look too inviting. We definitely wouldn’t have wondered down and stumbled upon it by chance. It was empty when we got there but very cute. White lanterns hung from the trees and there were tables set up outside. I loved it!

I ordered vegetable noodle stir-fry, which was good but the food in Vietnam, for vegetarians at least, seems like a lot of the same. Other countries had had more options available for me but at least I wasn’t starving. Mary tried the meat version of the Vietnamese pancake that I had tried the first night. Although it was explained to her how to properly eat it. I had missed the stuffing everything into rice paper step. We also opted to try dessert here as we hadn’t tried any traditional Vietnamese desserts, besides our goofy doughnut. Bánh ít lá gai is as hard to describe as it is to pronounce. It was a sticky tar like dessert, about the size of a cupcake, which was stuffed rather blandly with a mochi like substance and rapped in banana leaves. It wasn’t bad but it wasn’t great either. We mostly laughed while eating it because it was so far from what we had expected and the chewy tar was hard to get down. Apparently it’s traditionally served at weddings and celebrations, so at least we can say we’re cultured.

After dinner we walked home and packed up for our train, which was leaving at 11:30am the next day. Hoi An had been great but I think we were there just the right amount of time. It’s just not big enough to stay any longer. When we got home and were packing up we discovering a colony of ants that had collected on our wall. They didn’t seem to have gotten into any of our stuff so we let them be as they marched around. We watched John Wick, which was actually rather good despite the fact that it starred Keanu Reeves. It was basically a story of a man avenging his murdered puppy, and who doesn’t love that.