Fazed in and out of sleep for the last couple of hours before glancing out the window behind me when the sun came up. It was just after 6am and our train was running just along the coast. The view was breathtaking. Ocean, or South China Sea, as it turned out, was our sunrise view. We watched the train make its way down the coast as the sun came up and our infant roommates began to stir. They smiled at us and bounced along as the train continued to chug closer to the city. We got off at Da Nang around 6:30 and were picked up by a car from our hostel. As we were loading our bags in the car I realized I had forgotten my small folding backpack on the hook in our cabin. I could have run back for it but all that was in it were some crackers, Pringles and a water bottle. I needed the backpack itself more than any of the contents, but even the backpack I had gotten for $6 from TJ Max right before leaving for the trip. I had already used the sewing kit in our Cairo hotel room to sew a pocket that was beginning to tear. Let’s just say it was no super high quality. So the backpack became my casualty of the trip. I don’t want to say “first casualty” because I haven’t lost so much as a hair tie or a Chapstick before or sense then, so I’m hoping it will be my only loss. 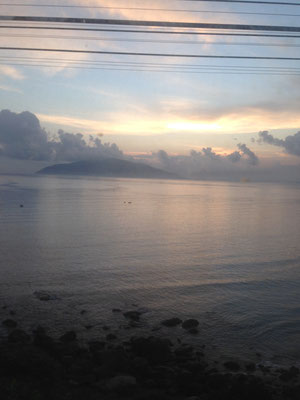 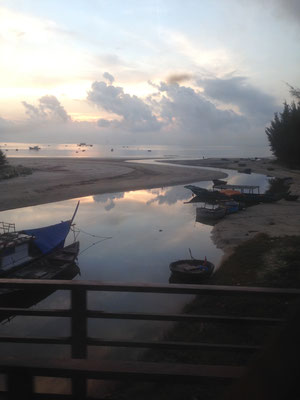 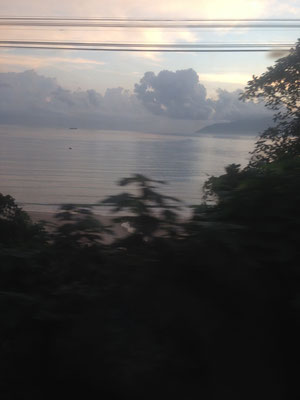 We drove through Da Nang for about 40 minutes to Hoi An, which is a smaller, more pleasant, town. Our hostel was located on a narrow, dirt, road next to a few other small houses. It was actually a homestay. Countryside Moon Homestay was the name. There were cute lanterns out front and a little patio where we sat to eat breakfast and wait until the person who was occupying our room had checked out and it had been made up for us. I ate 2 boiled eggs and a piece of bread they also gave us fresh fruit, coffee and tea. Mary got an omelet. We waited for about an hour until our room was ready. Our room had a queen sized bed and a fairly basic bathroom. It certainly wasn’t anything fancy but it was totally livable for $12 a night, including breakfast, and it was a palace compared to the train.

When we got settled into our room we took a nap for about an hour, waking up at 11 to start our day. We walked into town, which was only about a mile away. We became very familiar with Cua Dai Street, zigzagging our way around it several times. All of the shops were selling similar things, all basically aimed at tourists but not too cheap or knick-knacky. The shops came in less than a dozen varieties. Either lanterns, leather, tailor made clothes, luggage, or tours. There was also a fare amount of restaurants and spas. Soon after entering the town a local women approached us, clearly knowing we were tourists. She convinced Mary to come into her shop where they sold tailor made clothes. Mary was looking to have three, silk, sleeping, shirts made. One for Lee, one for Kaylee and one for herself. They measured her, took the design she had in mind, and her money. It was $62 total and they were supposed to be ready by 5pm the next day. At another shop I found a silk robe, which I didn’t need but I thought it would be cute to bring home and wear while I get ready in the mornings, instead of my current, 5 year old, robe. And it was definitely cheaper than a silk robe at home would be.

As we continued walking we discovered a quieter part of the city, which ran along either side of the water. There were few people in general out but very few tourists. We went into a little bar for a drink and a snack. I got a banana colada and spring rolls and Mary got her usual beer and some local noodle and pork dish.

Mary was also dead set on getting motorbikes to tour around on. I liked the idea in theory but was really nervous with the way traffic is. I did not want to end up in a Vietnamese hospital. Mary had succeeded in persuading me by the time we stumbled on a place renting out motorbikes, which doubled as a Laundromat. We paid about $6 each or 500 dong for the bikes, plus 60 dong for a liter of gas each. The women at the shop gave us directions to the beach, which we tried to follow but got turned around a few times before really figuring it out. At least that gave me time to get comfortable, or at least more comfortable driving. The ride to the sea was 15 minutes. It was overcast for most of the day but that meant it wasn’t too hot, so the weather was actually quite perfect, compared to the rainy season weather I had prepared for. We parked our bikes in front of a small shop that charged us 10 dong in exchange for watching our bikes, plus we got a large bottle of water. We took off our shoes and venturing down to the beach. The water wasn’t too cold but the waves were pretty big, and it wasn’t hot enough outside to swim anyway. The best part was it wasn’t crowded at all. Hoi An was exactly my pace. Plenty to see and explore without the big city, touristy feel. We walked along for about a quarter mile before stopping to scope out the seashells.

There were lots of cute small shells and more vibrant colors than I was used to seeing. I collected as many as I could reasonably fit in my fanny pack, as I still didn’t have a backpack, I even found a small sand dollar. Before we headed back to the entrance of the beach Mary and I wrote “Chokecherry for Life” in the sand with shells and took a photo. It didn’t turn out great but it was fun nonetheless. We stopped at a bar overlooking the water and Mary got a beer, I got a sprite and we debated the cost of living in Colorado and the pros and cons of development. We saw a Vietnamese woman in a wedding dress taking pictures on the beach with her newlywed, not Vietnamese, husband. There was also a cute puppy playing down by the water that we went down to pet before leaving. 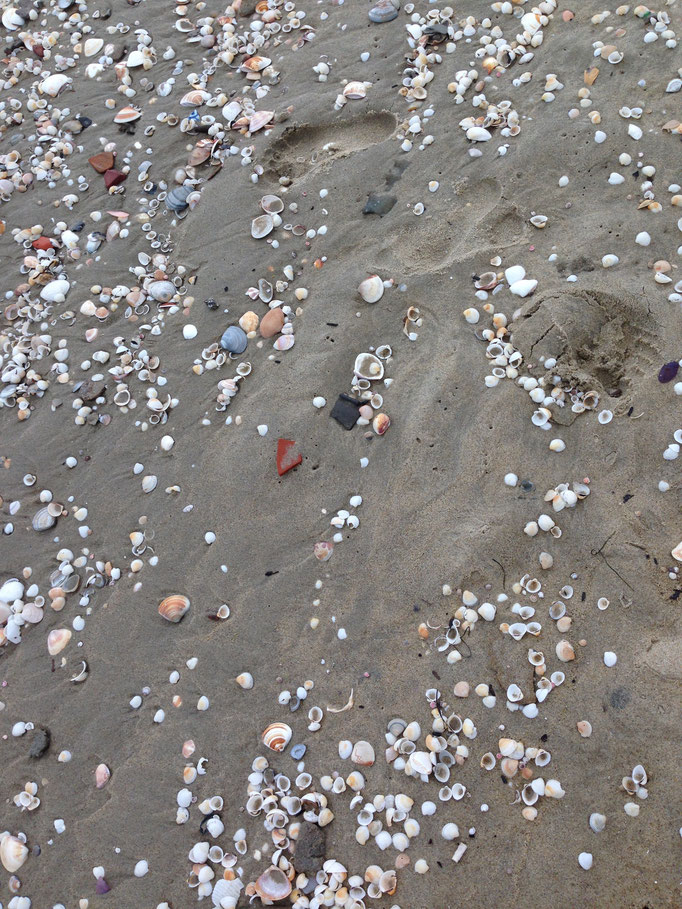 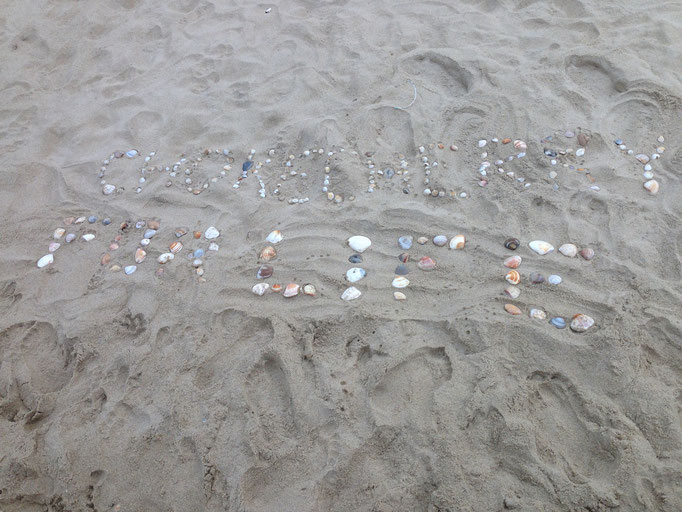 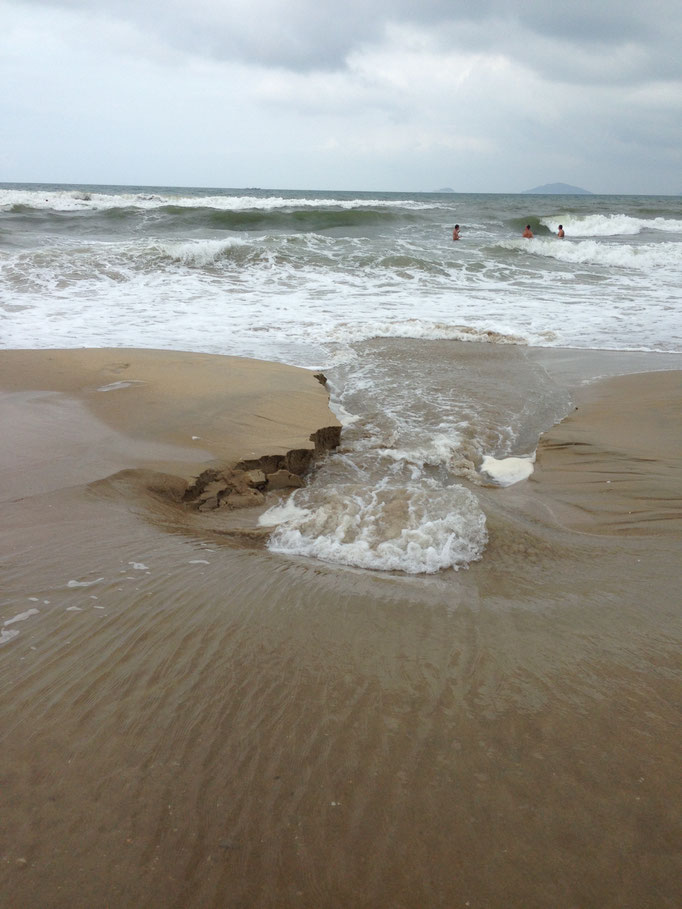 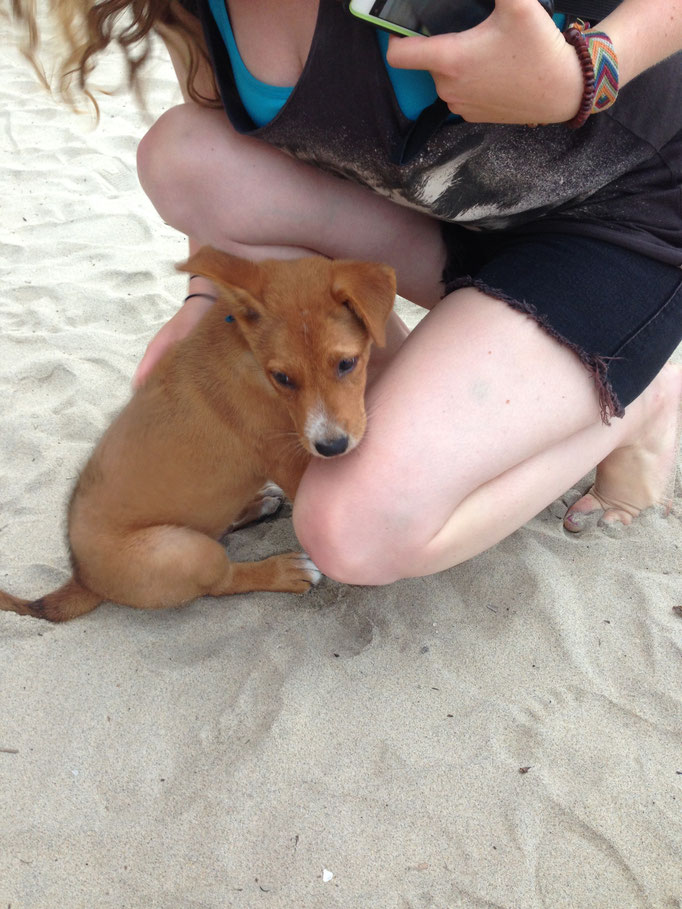 The sun was starting to set and we wanted to get home with the motorbikes before dark, but this didn’t happen. Our bikes had no headlights, which we discovered only after it was already dark. We also discovered that Hoi An gets much busier at night. This is when rush hour and tourism really blossoms. It was a sketchy drive home at best, but it was like a wild initiation into both motorbikes riding and driving in Asia. We walked back into town for dinner after dropped off our bikes at the hostel. We wanted to go back to the cute, quiet, river side street we had scoped out earlier but this had become tourist central. There were street games and venders and tourists lighting little paper lanterns and sending them, with a wish, down the river to be collected in some polluted landfill of tourist dreams. We basically ducked into the first place we saw, which was a poor choice. The staff was nice, as they have been everywhere, but the food was probably the worst I have had on the trip so far. It was still completely edible, which speaks to the quality of food abroad, but it was just bland and plain and we should have gone somewhere else. After dinner we walked home to shower from the dirty day. While Vietnam doesn’t smell nearly as bad as Thailand, it is dirtier in the sense that it’s smoggy and dusty. There was always some smoke in the air from crops being burned and everyone wears medical masks to avoid breathing the air. We watched a movie called “Identity” from 2003, it was a murder mystery thriller type, before falling asleep.