The alarm went off at 4:30 but it was 4:50 before everyone had really started getting ready to go. We were all tired, not saying much, but we stumbled out the door by 5. We knocked on Amy’s door and she answered in the dark and said they had gone to bed an hour ago, so they would not be joining us for sunrise at Angkor Wat. We got a tuk tuk for just the four of us and headed out in the dark. It was still pitch black when we arrived and flashlights guided the way up the path and over the moat to a small lake of water, which people had already started to surround. The crowd was large already but grew and grew to thousands of people as the minutes ticked by. We found a nice spot on the top of a small hill where we waited as the sky slowly turned from black to deep blue and finally splashed with color as the stars went to bed.

Maybe by this point I was disillusioned with sunrises, or large crowds, or lack of sleep, or temples all together, but I’m not going to sugar coat it, I was pretty over it. It was just not that exciting cramming in with thousands of other tourists, all illuminating the early morning with smart phones. I was impatient and wanted to see all of the temples before it got too hot again but it sounded like we were going to have to go back to the hotel to meet Michael and Amy before we did anything else today. By the time the sun came over the temple it was nearly 7am. We headed inside Angkor Watt to try and see it before it got too crowded. On the walk up we spotted a few monkeys near the path. Before Thailand I had never seen monkeys in the wild before but these monkeys were hardly wild. They were very agile, snatching things from tourists and getting into the trashcans, spreading garbage as they tore into the bags looking for goodies. I got pretty close to a few of them. They were pretty mischievous and not anything I would ever want to tangle with but they certainly knew their way around the tourists.

Luckily, inside the temple we didn’t see too many people but discovered later it was because they were all in line waiting for the centermost portion of the temple to open. We got in line with everyone else and waited for about 30 minutes until the line started moving. This is when a security guard came up to me and said, “Sorry lady you can’t get in.” I was wearing a racer back tank top with a shawl pulled around my shoulders, everyone else had on t-shirts. Yesterday I had worn a t-shirt to avoid this very problem and had seen half-naked women walking around the temples with no trouble. So, today I had chosen comfort over customs and it meant I would be watching from the sidelines, as only women who had their shoulder covered were allowed up the stairs. Apparently my shawl was considered insufficient.

I sat at the bottom of the stairs while Mary, Lee and Adam went up. As I waited I watched other women get turned away by security. After about 15 minutes the other three made their way back down. They said it was nothing to write home about, which I figured as I observed the quick turn around of other people going up and down the stairs. While Angkor Wat is considered one of the wonders of the world, the interior is far less impressive than some of the other temples we visited while in Cambodia. I would recommend skipping it unless you are dying to get the sunrise photo outside. We also saw many monks walking around the temples, often in large groups. The mystique of monks was sort of ruined for me on this trip as they walk around with their ipads and cell phones, taking pictures like any other tourist. Lee and Mary said they had even seen some smoking. Now, I’m not sure if the guidelines for monkhood have been lowered in recent years or if they have always been this lax, but it certainly didn’t look like any kind of a spiritual or holy pilgrimage for them.

Once the four of us were heading out of Angkor Wat we remembered we had rented our tuk tuk for only the morning sunrise and it was now past 8am. We hurried back to him where he demanded more money because we had taken too long. We settled on $3 and he drove us back to the hotel. There, we ate a delicious breakfast and met Michael who was headed to Angkor Wat, although Amy wasn’t. After breakfast we went upstairs for a nap. We slept until about noon and then decided to go to a temple called Banteay Srei. It was about 45 minutes, via tuk tuk, away and Adam had discovered it while searching online. Our tuk tuk driver had a little trouble getting us there. I think he was losing air in one of his tires causing him to blow through gas faster than usual. We had to pull over to what, I only have the English vocabulary to call a gas station, but in reality it was a hut on the side of the road. The gas was filled in what looked to be old, liter, soda bottles. But it was enough to remedy the situation and keep us going. Though Banteay Srei was in a more secluded location and was harder to get to, it was supposed to be one of the most beautiful temples, and it was. I was not at all disappointed when we got there. In addition to the water buffalo casually wading around in the water outside, the temple itself was fantastic. It was small but ornate and not crowded the way Angkor Wat had been that morning. We spent about 30 minutes walking around together, which was noticeably easier with 4 instead of 6 people. *Banteay Srei was my favorite place in Cambodia and my spirit tree is located just outside of the temple walls. 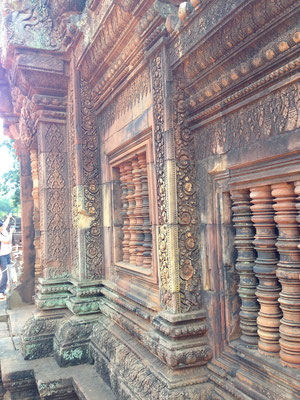 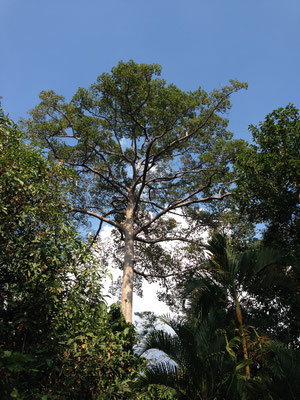 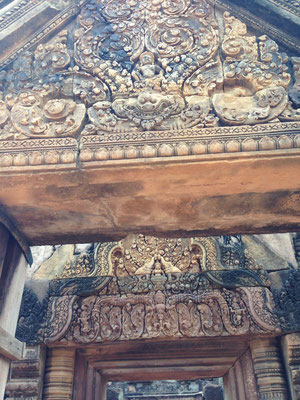 The next temple we headed to was Ta Phrom. In my original research of Siem Reap I had thought that the pictures of Ta Phrom where actually those of Angkor Wat, which might explain my disappointment in the actual Angkor Wat temple, and my desire to see Ta Phrom. It hadn’t been restored like some of the other temples thus, tree vines and roots overtook the ruins in picturesque drapery. Besides the aesthetic appeal of the additional foliage it also added shade. This made it noticeably more comfortable and less draining to walk around than it had been yesterday. It took slightly longer than we had planned to make it through Ta Phrom, especially after we accidentally come out the back side and had to walk all the way back through to meet our tuk tuk driver on the other end.

It was about 4:30 by the time we made it back to the hotel. The plan was to go to happy hour then have dinner and watch the sun set near the floating city but, as was typical with this group, the plan became no plan. We went to happy hour at the hotel bar and got 2 for 1 drinks. I again, got 2 margaritas. We ate appetizers like carrots and hummus and spring rolls. Amy didn’t feel like going to dinner so we filled up on apps and then went to meet Tony for a drink on Pubstreet. He too had made his way from Bangkok to Siem Reap and the girls wanted Amy to meet him. On Pubstreet we only had one drink before heading back to the hotel. This was lucky for me because my acid reflux had taken full effect. The three drinks had proved to be too much for my digestive system, and esophagus, to handle.

Back at the hotel we printed our visas and boarding passes for the next day as we would all be separating in the morning. I laid down, feeling like absolute shit, realizing I had been sick since the last day in Egypt, through all of Thailand and now all of Cambodia. This was certainly not how I had pictured feeling for two whole legs of my travels. Lee and Adam packed because they were leaving on a boat with Tony, heading for Phnom Pen in the morning. Amy and Michael would be flying out soon after them at 9am, with Mary and I being the last ones to leave.