You're Such a Handsome, Good Listening, Camel!

First real day in Cairo. I slept from 11pm-1am then from 4am-6:15am when my alarm went off. The jetlag was painfully real. The shower water came out brown for the first few minutes so I just let it run until it was clear before I got in. Also, it leaked somehow and the bathroom floor was soaked when I got out. We got ready, packed up, checked out and then ate breakfast. I ate fava beans, waffles, 2 hard-boiled eggs and orange juice, which was more like Sunny-D.

After breakfast we went to a conference room where we met the remaining members of our group and our Egyptologist guide, Waleed. Nate and I loved Khalifa so much on the first day that when we met Waleed we were hesitant. We also weren’t sure what to make of everyone in our group. Mostly everyone was in pairs, except for two single women and one single man. Age and nationality were all in various ranges but in total there were 17 of us. We took money out of the ATM before heading to our big bus, which drove the whole tour group, our new “Family”, to the pyramids.

Waleed told us about the pyramids, who had built them and when. What they originally would have looked like with the white and gold casing on the outside, which has since worn away. Then we had an opportunity I hadn’t prepared for. We got to go inside the Great Pyramid! You were not allowed to take photos inside, which was probably for the best considering the trek up inside the pyramid required two hands. You climb up about 4 rows of blocks at the base of the pyramid and give a guard your ticket. The ticket costs 200 L.E. or about $25 U.S.D. This is on top of the entrance fee you must pay just to get near the pyramids, but it’s obviously worth it. A once in a lifetime experience for $25, sign me up! Inside it resembles a cave for about 20 feet then it gets narrow and you climb a metal ladder up 4 steps. After that you start a 45-degree hike up. The floor is lined with wood planks that you use as steps to gain traction. There are handrails on either side, and you need them. The higher up you go the lower the ceiling gets. By the end you are completely crouched over, hiking up inside the great pyramid as if you where climbing Mount Everest. When you get to the top, I think about 300 feet in, you have reached the King’s Chamber. At the entrance you have to duck down even farther to go under large, stone, blocks.

The chamber itself is a 15-foot by 35-foot empty room with granite walls and high ceilings. At the far end of the chamber there is a stone sarcophagus with an open top. Some tourists took turns lying down inside of it, a disrespectful practice that I did not condone. The chamber was hot and humid so we probably only stayed about 5 minutes. Constantly reminding ourselves we were inside the Great Pyramid, we were inside the last remaining, and oldest, of the Seven Wonders of the Ancient World. We then climbed back down the shaft the way we came, except backwards, hot, looking behind us to see where we were going, and hoping nobody was coming up. When we got out we found our guide, Waleed, who was not allowed to follow us in. He had gotten into and a sort of fight with a hustler who had been trying, aggressively, to sell to people in our group. They were in a screaming match that got heated before our guide began yelling for a guard.

After exploring around the pyramids a little longer we walked back to our bus. A few people had managed to wonder off and so it took a while to get everyone organized. Once everyone was accounted for we rode to a quiet place on a hill, overlooking all of the pyramids. At our spot on the hill we learned about the different types of pyramids and how the Nile used to come right up to the burial temples near the sphinx. This is where they would prepare the body for mummification.

Once our lesson was over we walked to where several people were waiting with camels. Waleed appeared to know the men we rented from. We had the option to ride camels over to the other two pyramids or to walk. Obviously I was going to ride a camel, which are like 13 freaking feet tall by the way! I got a really pretty one who was also a good listener. They stand up to walk at a very sharp angle so you have to hold on tight so you don’t go rolling over the top of them. Camels also make interesting noises, which I can only describe as whale sounds. The men hooked all of the camels together to walk in a line until about the half way mark. Then they stopped to take our pictures on the camels, both individually and with the group, with the pyramids as the backdrop. We then had the chance to take the reins ourselves and steer our camels if we wanted to. Again, obviously I did. My camel was a very good listener and responded to me pulling the harness left or right, very similarly to driving a car. He did veer off course briefly to make a snack out of a dry bush before continuing on. I tried to reassure both of us by telling him, “You’re such a good camel, you’re such a handsome, good listening camel.” I had a lot of nervous energy. The men that guided us for 100 LE plus a 10 LE tip were very friendly and I felt 100% comfortable. You could tell that they were used to working with westerners. At the end, towards the base of the second pyramid, we dismounted. This was about 50% as terrifying as the standing up. 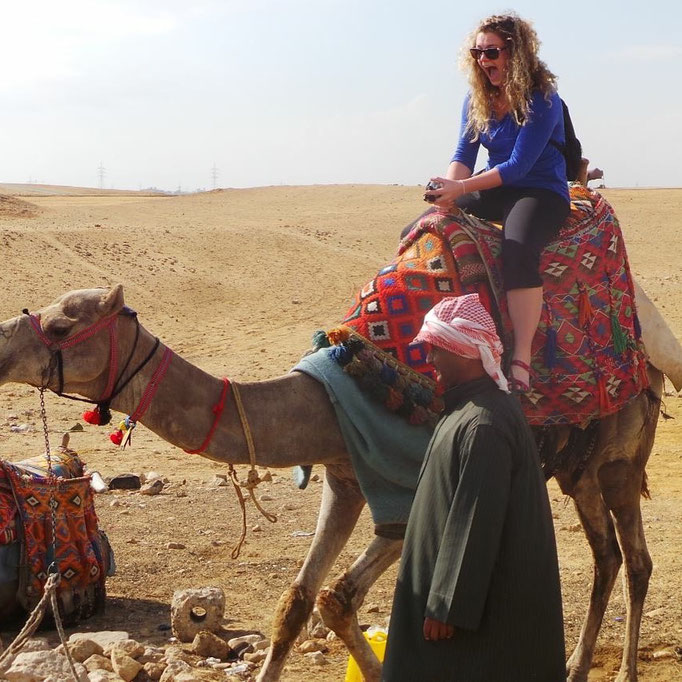 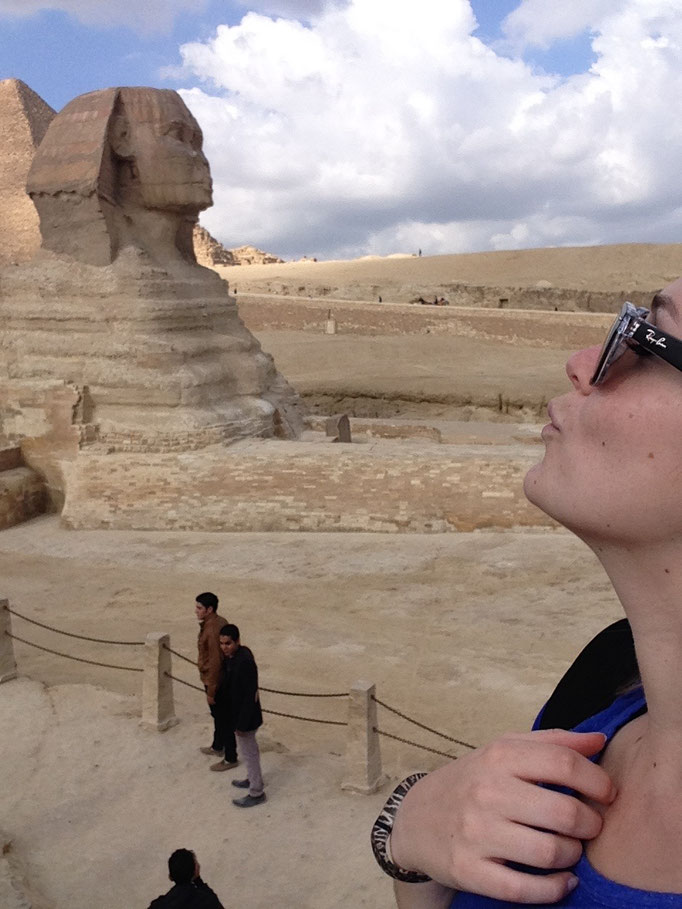 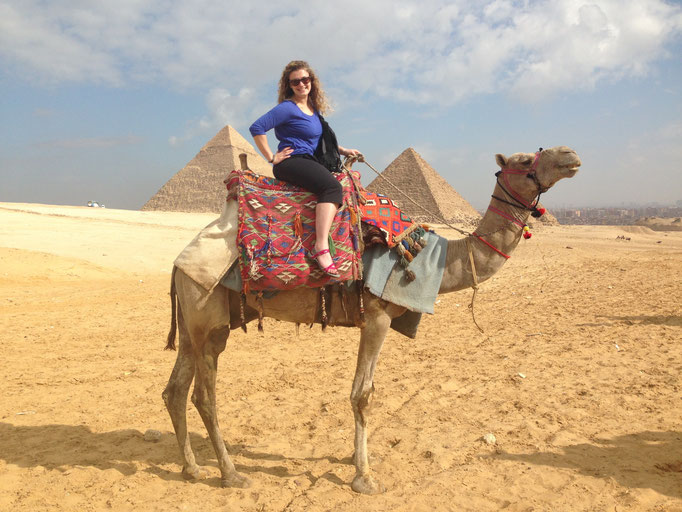 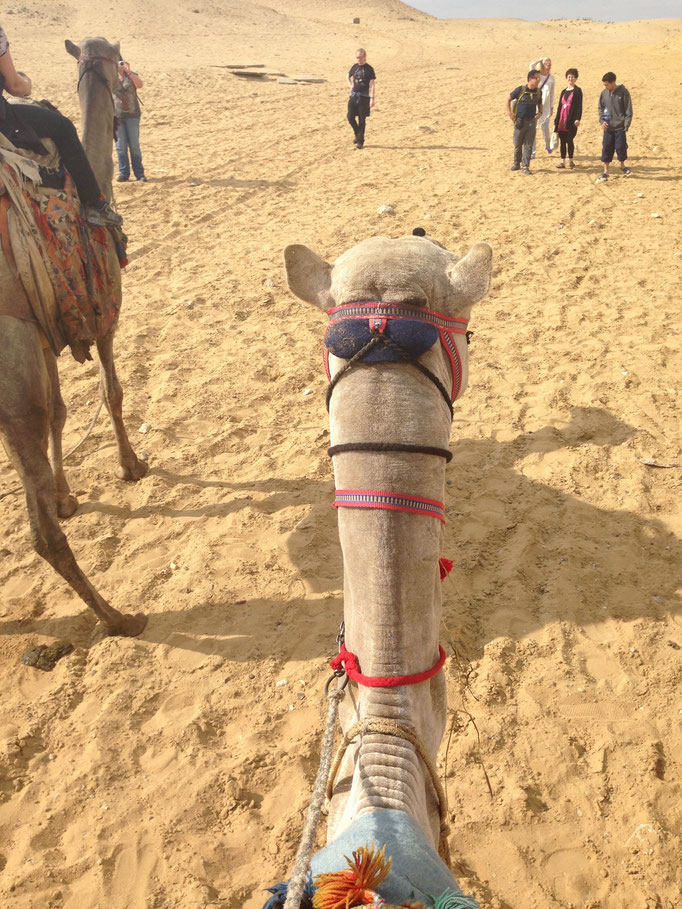 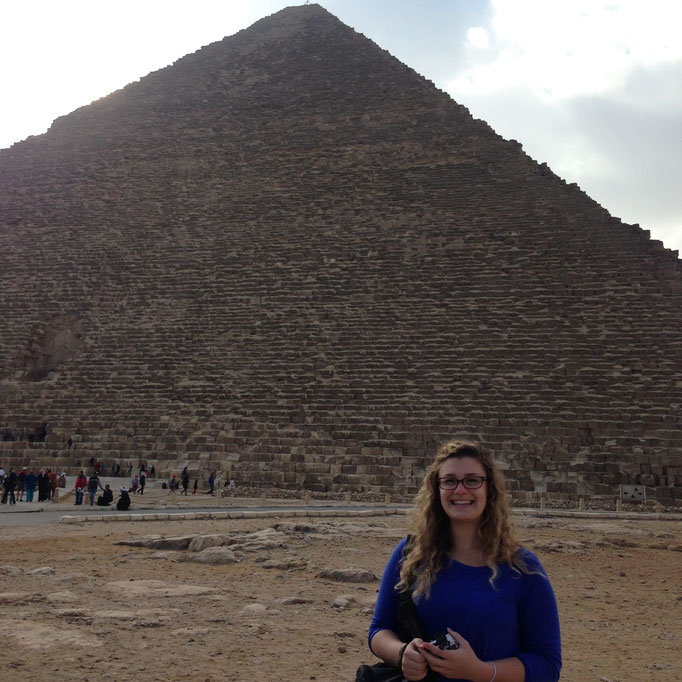 Waleed then told us how lucky we were to have blue skies with white puffy clouds. He explained that the light breeze this time of year makes this possible and that in the summer months the air is stale and polluted. Afterwards we took the bus down to see the Sphinx. We entered through a temple made of granite that used to be used to treat the dead. We felt the walls and listened to the energy that resonated off of them. Energy from all the years and bodies (living and dead) that had passed through this place. We exited the other side of the temple where they had roped off access to the sphinx. It was very crowded here with many school children on field trips and tourists of all varieties hustling through. I tried, rather unsuccessfully, to get a kissing photo with the sphinx before giving up and climbing down. I was already tired from the day but we still had the Cairo Museum tour to do.

We spent about an hour seeing the highlighted artifacts of the museum, guided by Waleed, we then had another hour to go by ourselves. The Cairo Museum houses literally hundreds of thousands of antiquities. I wish I could have appreciated it more but I was doing everything I could to keep from falling asleep. I was now running on about 9 hours of sleep over the past 3 days and that was not enough, to say the least. Nate and I ended up paying extra to go into the mummy rooms. We saw about 20 mummies of all varieties. The royals, were all a lot shorter than we had anticipated, due largely to their incestuous breeding. Afterwards we went to find the group in the designated meeting spot, which was teaming with kittens! Again, it took a long time to get everyone rounded up on the bus. We all applauded obnoxiously once the last person had boarded.

I finally fell asleep as the bus started rolling. I woke up when we arrived at our next destination, which meant to serve as dinner, attraction, and time killer before our 8pm train ride and 10:30pm flights left for Aswan. It was a perfume shop full of beautiful glass containers, each filled with different color and consistency perfumes. First they fed us a traditional dish called Kushari. It consisted of rice, spaghetti noodles, macaroni noodles, lentils, tomato sauce, onions, garlic and various other spices. It basically tasted like spaghetti, and it was free. We also got to drink peppermint tea, which was delicious, as we sampled the different concentrated smells of rose, lavender, sandalwood and other bases of our favorite perfumes. The owner of the shop explained how they made their perfumes. He was very worldly and funny, speaking in many different languages at once. He also told us that he held the record for climbing the great pyramid the fastest and showed us a photo to prove it. He explained that on the day he did it, someone else nearly matched his time but they fell and died coming down. He told us that he had climbed the pyramid in 4 minutes and 30 seconds up and 2 minutes and 30 seconds down.

There was some pressure to buy his oils because he had fed us, but it just wasn’t practical for me to spend a lot of money on a decorative glass bottle filled with oils that would likely break and spill during some leg of this trip. When we left the shop the group that was taking the train got back on the big bus and those of us that had opted to fly got into a smaller van. It was Nate and I with both of the single women and the single man. We sat in traffic for over an hour on the way to the airport and after a few bumps in the road we finally made it to our gate without missing our flight. Although it was a short flight from Cairo to Aswan it was late at night, so by the time we got to our hotel, found our room, explored the property a little bit, and settled down it was after 1am. It had been another amazing, long, day of traveling and I was ready to finally get some sleep.