Had to wake up early today to meet our tour bus to see the CuChi Tunnels, which the Vietcong guerrilla fighters used during the Vietnam War. I think Mary and I were both initially put off when we saw the size of our tour group. We had read about the huge charter buses crowding the area and making it hard for the several thousand tourists that visit each day to enjoy the site. And now we were one of them. Fortunately our guide was great. Mr. Bean (Billy Bean Rivera) was Vietnamese / Pilipino but had lived in the states as a kid and actually fought on the side of the U.S. Navy during the war. This gave an unbelievably unique and informative perspective. We went first, to a kind of art factory where disabled workers had been taught skills in order to earn a living. Mr. Bean told us that

these projects had been set up by the United States. It was sort of an apology for the use of chemical warfare. The same chemical warfare that generations later was still impacting the population. The results were evident as we walked through the tables of workers. Many of them were using crushed egg shells to create meticulous pieces of artwork. It was cool to see a program like this working, or at least being set up. Mary and I bought key chains there to support the effort.

We then headed to see the tunnels. It took an hour and a half to get to and from the site even though it was just 40 kilometers away from Ho Chi Minh City. It was relatively busy when we got there but I was excited about the prospect of having another great tour guide so we braved the crowds and 95 degree heat to see the tunnels. Our guide told us pretty unbelievable stories, like for real I need to fact check them, but if they are all true I’d like to find and read the book he’s going to write. It was kind of weird because he was definitely opposed to the communist party, as were most of the Vietnamese people we met, but our group was mostly Korean and Australian, I think Mary and I were the only Americans, so I don’t think everyone else understood the magnitude of where we were as much as Mary and I did.

I was excited about the prospect of actually getting inside the tunnels, that is until I saw the tunnels. One opening was barely 18”x 18”, it freaked me out. It also bummed me out because I have become more fearful and cautious the older I get and I hate that. I think on the surface I'm adventurous, traveling the world and whatnot, but things like getting stuck in small spaces and riding roller coasters have started to hang me up a bit and I wish I could just get over it. The jungle we walked through was complete with gimmicky explosions that went off when we discovered a trap door. It showed what it would have been like to be ambushed by the VC during the war. Our guide explained why the guerrilla style fighting was so effective in this landscape. The Americans were not used to the climate or the jungle while the locals easily maneuvered through the thick trees and tiny ground tunnels. Thus, the American use of chemical warfare to strip the forests. We also saw some particularly brutal traps used to kill the American soldiers or at the very least horribly injure them. It was amazing having a guide with experience from our side instead of the VC side. Mary agreed it made it more relatable and noted that there are not many other places abroad that contain so much U.S. history. It was mind blowing being there and imagining all of the people I know, my neighbor, my uncle, fighting there fifty years ago. Now here I was, vacationing on their battleground. 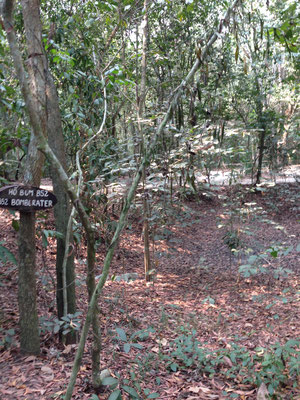 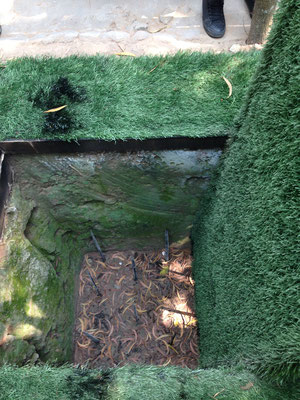 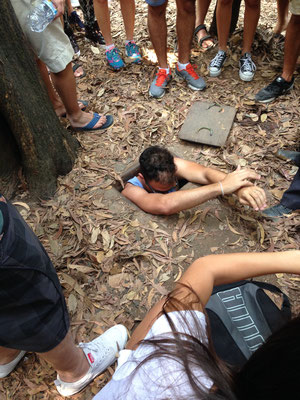 In a rest stop area of the jungle we took a quick break. There was a gun range there where tourists could pay to shoot machine guns and other weapons. The noise was unbelievably loud and could be heard throughout the tour, adding some effect to what it would have been like during the war. When we got to the end of the tour we had the chance to actually crawl through the tunnels. The beginning sections had been widened so that “fat ass westerners”, an exact quote, could fit though. Still, many people opted to not go in, as they were too claustrophobic. We knew the tunnels got smaller and smaller as you went but there were exits along the way where you could get out if you needed.

I went in with Mary in front. It wasn’t unbelievably small but it was definitely a tight fit. There were a group of Australians behind me and they immediately started to panic, their panic rubbed off on me and I got out at the first possible exit. I didn’t want to risk the tunnel getting much smaller, me panicking, and not having an exit around. Mary continued the entire length. Once I got out and saw how frequent the possible exits were I regretted not going to at least one more. The tunnels were incredibly hot and humid and almost pitch black in areas. When Mary got to the end she said that in the smallest area of the tunnel they were all literally crawling. The Vietnamese are tiny little people and apparently in a jungle war that gives you an enormous leg up.

By this time it was after 1:30 and we were exhausted and ready to go home and take a nap. Not to mention eat some lunch. I couldn’t imagine walking around in military equipment in this heat while being afraid that every step I took might be my last. It took an hour and a half to get our bus, full of sweaty tourists, back into the city where Mary and I found a place to get lunch. Café Lam had an unbelievably large menu and a westerner working there, likely the husband of one of the owners. I got spring rolls and fried rice. Mary had stopped on the way to try a street sandwich, which we had read were very good, but she was disappointed. Though, it had been a long sweaty day any food was nice. I also got a yummy lemon shake. We wandered, too hot, back to our hostel to check in for our flight to Phu Quoc. We would be heading there the next day and we still needed to book our accommodations. We planned on taking a nap, but it was 4pm and we had just eaten lunch so instead we sat in the room researching for Phu Quoc until 1am. We watching movie after movie, including Gone Girl and 21. We also got emails that our flight had been delayed so we were going to get an extra hour of sleep.